Bike ride to celebrate the Europe Day and the 15th anniversary of Poland’s accession to the EU 2019-05-15, Category: Programme news 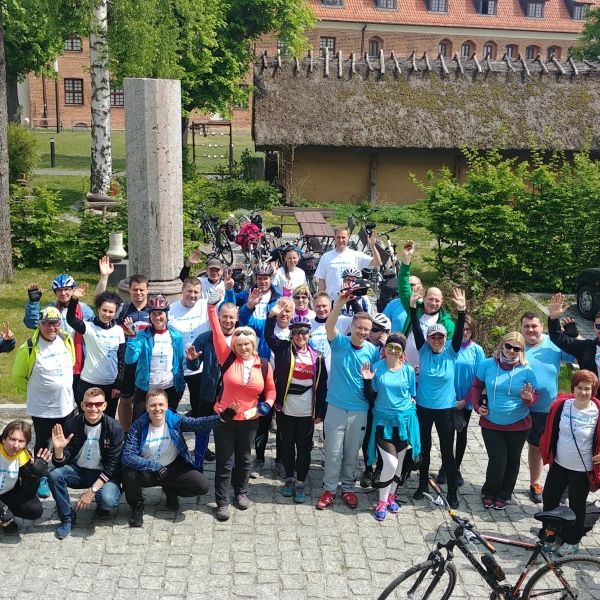 On 10-11 May 2019, the bike ride “Europe Day with the cross-border cooperation programmes: Poland-Russia and South Baltic” was held. It was organised to celebrate the Europe Day and the 15th anniversary of Poland’s accession to the EU. A total of 28 participants from Poland and 10 participants from Russia took part in the event.

The bike ride began on Friday, 10 May 2019, in Elbląg. First, the participants visited the Museum of Archaeology and History, a beneficiary of the project „Museums over the borders” in the Lithuania-Poland-Russia Cross-border Cooperation Programme 2007-2013, and the port in Elbląg that was modernised within the project „SB Transport Loops” in the South Baltic Programme. Next, the cyclists rode to Krynica Morska, which was the target of the first day of the ride.

The following day, the participants visited the harbour in Krynica Morska. It was modernised within the project „Baltic amber coast. Development of cross-border area through building up and modernisation of tourism infrastructure” in the Lithuania-Poland-Russia Programme 2007-2013 and within the project „South Coast Baltic” in the South Baltic Programme. From the harbour, the participants took a cruise ship to Frombork. In Frombork, they had some free time for visiting the town or riding along the Green Velo route to Nowa Pasłęka. After the lunch in Frombork, the cyclists went to Braniewo, where the official end of the ride took place.

During the event, the participants had the opportunity to get acquainted with the results of the projects, which were implemented within the Lithuania-Poland-Russia Programme 2007-2013 and the South Baltic Programme. Under the leadership of the Association of Active Tourism Center "KOŁODROM" a distance of around 100 kilometers was covered by the participants. The additional attraction of the event was a bonfire in the evening and competitions with gifts for the winners.

We would like to thank all the participants of the bike ride for their active participation.