Meeting of the Northern Cluster during the Congress of Local and Regional Authorities of the Council of Europe 2019-11-05, Category: Programme news 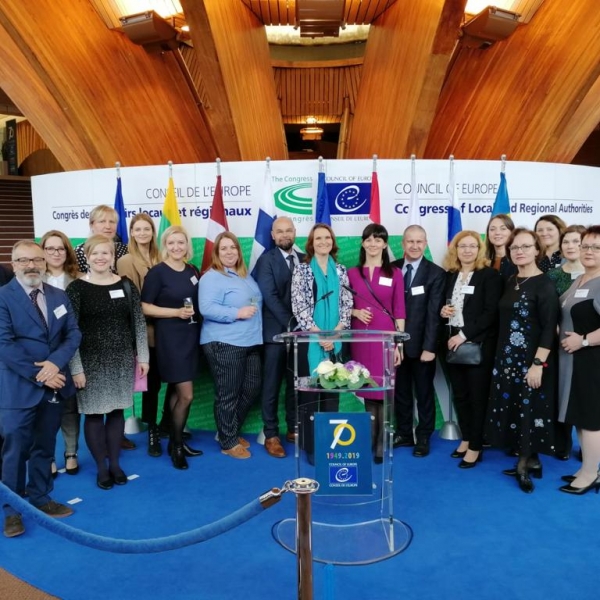 On 29-31 October 2019, the Congress of Local and Regional Authorities of the Council of Europe was held in Strasbourg. During this event, programmes implemented at the external borders of the European Union, especially 7 cross-border cooperation programmes of the Northern Cluster, in which the Russian Federation is a partner (Kolarctic, Karelia, South-East Finland-Russia, Estonia-Russia, Latvia-Russia, Lithuania-Russia, Poland-Russia), were presented.

During the Congress, events on a side were organised to promote cross-border cooperation programmes. Moreover, on 29-31 October, participants could get information on the European Neighbourhood Instrument programmes at the promotional stand. On 30 October, presentations about 7 cross-border cooperation programmes implemented at the external borders of the European Union with the Russian Federation were provided. The main areas of interest were related to the environment, health, business support, cultural heritage or interpersonal cooperation. Ms Katarzyna Maria Bartnik – Head of the JTS of the Poland-Russia Programme 2014-2020, presented examples of projects in the field of cultural heritage related to the protection of monuments, creation more attractive places for residents and tourists of the Polish-Russian borderland, which were co-financed from the Lithuania-Poland-Russia Programme 2007-2013 or will receive support from the Poland-Russia Programme 2014-2020.

The Poland-Russia Cross-border Cooperation Programme 2014-2020 was represented by the representative of the Managing Authority – Ms Ewa Termena-Chyży – Minister’s Counsellor in the Department of Territorial Cooperation at the Ministry of Investment and Economic Development, Mr Leszek Buller – Director of the Center of European Projects and Ms Katarzyna Maria Bartnik – Head of the Joint Technical Secretariat of the Poland-Russia Programme 2014-2020.