The opening of the bridge in Bartoszyce is behind us! 2021-12-21, Category: Programme news 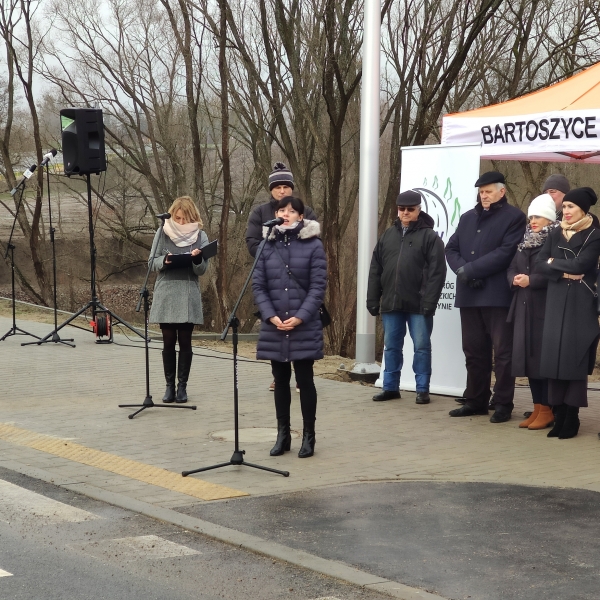 On the 15th of December, 2021, a new 108-meter-long bridge on the Łyna River in Bartoszyce in the Warmińsko-Mazurskie Region was officially opened. Moreover, in the same town a reconstruction of the regional road no. 512 along Poniatowskiego Street in Bartoszyce (about 590 meters) and the construction of a completely new road section with a length of 641.5 meters were conducted. The investment, exceeding PLN 51 million zlotys of the total cost, was one of the key projects implemented within the Poland-Russia Cross-Border Cooperation Programme 2014-2020, receiving co-financing from the Programme in the amount of 7.2 million EUR.

During the opening of the bridge and the new and reconstructed section of the road no. 512 there were the authorities of the Warmińsko-Mazurskie Voivodeship, represented by the Marshal (Mr Gustaw Marek Brzezin), Vice Marshal (Mr Miron Sycz) and Member of the Board (Mr Marcin Kuchciński), local authorities from Bartoszyce County (including Starost – Mr Zbigniew Nadolny) and Bartoszyce Municipality  (including the Mayor of Bartoszyce – Mr Piotr Petrykowski) as well as residents and media. The Poland-Russia Programme was represented by Ms Katarzyna Bartnik, Head of the Joint Technical Secretariat in Olsztyn.

During the occasional speeches, the importance of this long-awaited investment related to the improvement of the quality of life and safety of the inhabitants of Bartoszyce and its potential for local development in the future was emphasized. It was also pointed out that it would not be possible to successfully complete the works without a joint project implemented with the Administration of the Gusev City District (Kaliningrad Region) within the Poland-Russia Programme.

It is also worth mentioning that the commissioning of the bridge in Bartoszyce and the new and rebuilt road no. 512 took place six months before the planned completion of the investment, which shows the determination of both – the investor and the contractor.

The opening of the bridge in Bartoszyce is behind us!