Completion of the project "Museums over the borders. Stage II " 2022-06-15, Category: Projects news 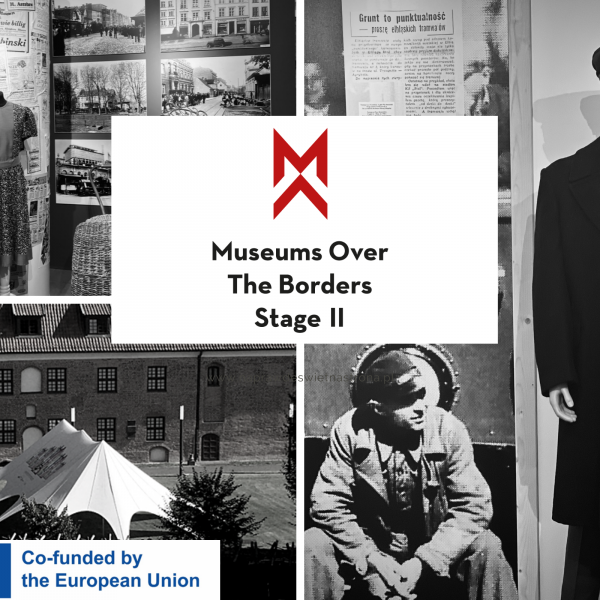 The project has been implemented since September 2019. Due to unforeseen obstacles caused by the COVID-19 pandemic, the initial completion date has been postponed to June this year. The Museum obtained funding in the amount of EUR 131 746.63 for the implementation of the project. These funds were used to enrich the institution's offer, including the implementation of new exhibitions and the creation of a friendly outdoor space on the premises of the museum.

In particular, as part of the task, the exhibition "Testimonies. History in Faces - Faces of History ”, which is a story about the former inhabitants of Elbląg and its vicinity who had to leave their homeland after World War II. This exhibition has been supplemented with a further part of this story, devoted to post-war settlers and the process of rebuilding the city from post-war damage, entitled "City of new people. Elbląg in the first post-war decade 1945-1955 ”.

Changes also took place in the museum's courtyard, where a herb garden was created and deckchairs were installed to ensure relaxation for visitors. Equipment enabling the organization of outdoor events was also purchased, including, among others, a pneumatic screen for film projections, tents, garden and lounge furniture. Thanks to the implemented investments, it is possible to use the green areas around the museum more fully for the purposes of conducting cultural activities.

As part of the project, the institution's employees also took part in conferences and other events carried out, among others, by the Partner – the Centre of European Meetings Światowid in Elbląg, who created a new multimedia center in its establishment. “Światowid” has acquired, among other things, a new scanner and additional equipment for digitising museum collections, enabling digitising monuments.

The culmination of the project was an open artistic event "Cultural (Un)rest", which was organized by the Museum in cooperation with the Elbląg Library on 11 June 2022. The participants of the event had the opportunity to take part in a meeting with Krystyna Kurczab-Redlich, a well-known journalist and foreign correspondent, listen to a jazz concert and watch the play "Process" performed by actors of the Form Theatre from Wrocław.